Short in stature but tall on talent, Ann-Marie has it all. With quick wit and an ability to dig deep emotionally, Ann-Marie has been cast in a wide range of productions including, comedy, drama, Moliere and suspense. Originally from the Ohio Rustbelt, Ann-Marie didn’t know what she wanted to be when she grew up until she was already grown up. As a result, she jumped in headfirst, training in Stanislavski, Meisner, voiceover and improv.

Ann-Marie also believes in writing and creating her own material. She recently produced her one woman show, Walking on Eggshells in Stilettos, for the 2019 Hollywood Fringe Festival, which received fantastic reviews from critics and audience members alike. “Ann-Marie Lariccia is adorable, talented and very, very funny, but she is also an ambitious and gifted storyteller.” –Samantha Simmonds-Ronceros Nohoartsdistrict.com 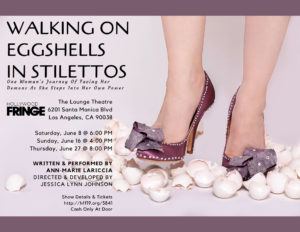